The TakeCare team from the University of Cranfield were a winning team at the Jisc Summer hackathon and talk about the app they developed….

TakeCare was our project tittle, or #takecare as the brand, which is an integrated students’ wellbeing service on the go specifically designed with university students in mind. 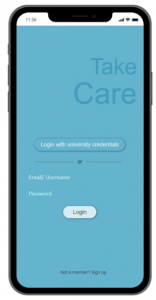 One motivation for this project was the personal situations we experienced individually during our academic year so far, especially being from different countries, where discussions on mental health have only recently been gaining more exposure. And even then, they are limited to the ones that are less stigmatised, such as depression and general anxiety. While our backgrounds influenced this idea under the students wellbeing hackathon theme, we found that this is a shared but repressed experience which affects university students and/or young adults uniquely.

With this idea, our discussions, and what we’ve seen in mental health existing analogue and digital support, we formed a case study to identify the gaps in the existing mental health technology industry incoperated with those from our university students health and wellbeing centre. What we found was that the industry was moving forward in integrating higher-end technological facilities, but it was severely lacking in the human aspect of the industry while students centre could not give the actual real time solutions to students need given the challenges of time, location including anonymous comfort of student’s discussions. The industry push is currently towards self-help and guides, but we are losing touch of the severe importance of a community. Often a call to a name without a face can feel like a shout into the void. On the other hand, sharing issues is a good process to de-stress and ground an individual, while also removing them from the sense of isolation.

To address the issues, we thought of something simple that is familiar to everyone, and accessible. The answer was a peer to peer support forum-based application. To us, any situation is an emergency, as wellbeing comes first, and we accommodated that thought in our design phase. This resulted in the design of a system that would allow the user to instantly connect with anyone from their respective institution, with whom they can communicate their struggles and issues. This person could be a peer, alumni or a volunteering mentor. These three categories were chosen based on their reliability to the user personally, as people from all these are able to relate to the user.

Another aspect of this application would be to make the user more in-touch with their situation throughout their peaks of academic year study and allow them to be more proactive in handling them. To incorporate this, another feature we added was the quiz and tips element, which would engage the students in thinking about their state of mind, and provide adequate resources.

Having JISC accept our idea which we applied from Cranfield University’s intranet, was very exciting as it is something we are passionate about. It was an opportunity for us to work on our project with the availability of lots of support and a chance to meet likeminded people with brilliant ideas.

On the first day, four of us joined the teams in Kents Hill Park Conference and Training Centre in Milton Keynes, after which we had an amazing dinner in Purple Mango. The night provided a great environment to relax before the big day, and network with interesting people from across the UK universities.

The second day was the main day of the hackathon, and we were given support and advice to work on our individual projects. To accommodate the time, we had to work parallelly. While Carol Nandozi and Khadijah Abdullahi Habib created the content of the application, Clinton Machoka focused on creating the forum and quiz sections with server side technologies, and Shafa Rahimun developed wireframes of our application prototype. The prototyping tool was Proto.io, as the web-based tool was ideal to quickly create an initial mockup from scratch. 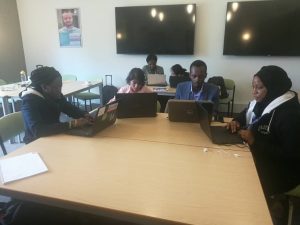 As we were progressing with our individual tasks, more branching of the project became interesting to us. The first one was the incorporation of distance-learning students. While our focus was initially on on-site students, one conference session on mental health that two members attended made us realise that distance learners also had similar struggles, with the added fact that they work in isolation and greatly requires the support of the institution and the sense of community. Furthermore, we had the chance to have a conversation with Alex who pointed out the importance of the sense of community, talking about a similar project that he worked on that gave us some areas to think about.

One of the challenges that we faced as a team was the connectivity issues related to server-side technologies which severely impacted the presentation of our specific ideas to our audience. Another challenge was to keep the focus of the app on a specific idea, instead of distributing the focus to different features – and this was a feedback that we received on the presentation day from our audience. However, the prototypes and the contents were heartily appreciated and this also helped us to be established as one of the winning teams in the hackathon.

Being able to present on the third day with the other universities in front of academics and industry experts from the Change Agents Conference (CAN2919) was a thrilling but humbling experience. The conversations that we had with the JISC hosts, academics and fellow participants simultaneously encouraged us and stimulated us to think about the significance and further applications of our idea.

Along with skills on presenting a power pitch in three minutes, which was also guided by Cranfield University’s Bethany Centre previous training. What we also learnt from the hackathon were the importance of early planning. While some planning helped us to kickstart early on the first day, some user survey or testing was needed that would help us to curate our focus on the features that are more needed.

Another learning point was how we were presenting our solution which was highly sought after but was not presented to a higher demographic and that’s something that we are planning to work on.

And finally, for some of us, this was the first hackathon experience, and this gave us the knowledge and skillset of not only developing and idea on a small, fixed amount of time, but also create a human-centred solution that goes beyond the capability of technology.

From this event, we are motivated to bring our idea further and possibly bring this into promotion for and application in the universities as, from the experience of a student representative, a solution like this can provide an improvement in the student health and wellbeing during their study for a better experience while boosting their achievement.

We use cookies on our website to give you the most relevant experience by remembering your preferences and repeat visits. By clicking “Accept”, you consent to the use of ALL the cookies.
Cookie settingsACCEPT
Manage consent

This website uses cookies to improve your experience while you navigate through the website. Out of these, the cookies that are categorized as necessary are stored on your browser as they are essential for the working of basic functionalities of the website. We also use third-party cookies that help us analyze and understand how you use this website. These cookies will be stored in your browser only with your consent. You also have the option to opt-out of these cookies. But opting out of some of these cookies may affect your browsing experience.
Necessary Always Enabled

Any cookies that may not be particularly necessary for the website to function and is used specifically to collect user personal data via analytics, ads, other embedded contents are termed as non-necessary cookies. It is mandatory to procure user consent prior to running these cookies on your website.